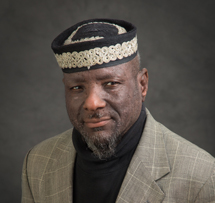 Khalfani is a son, husband, father, grandfather, and brother who weds his consciousness of culture and social justice priority into his Social Work praxis.  On the faculty at UW School of Social Work since 2016, he’s advanced DWSW, as “practivism,” championing practica and other (_i.Mu.R.g._) with the goal of dismantling Carcerality, which he’s proposed may be a prime performance of contemporary racism.

A therapist since the turn of the century, he dove intensely into evidence-based DWSW after earning his MSW as a Husky in 2009. Then, just four months after joining one of our region’s few funded desistance projects—the Community Center for Alternative Programs (CCAP)—Khalfani assumed clinical supervision there.  Coordinating therapeutic deployment of WAC-compliant, co-occurring Behavioral Health treatment; CBT, MI, and Seeking Safety interventions, he collaboratively engaged these with other promising practice treatment conditions, formatted for therapeutic group interactions. By way of KingCo’s then largest Behavioral Health organization, CCAP groups served roughly 120 reentry participants daily, for nearly a decade within this national model operation.

Also a respected cultural worker, Khalfani has studied African rhythm systems world-wide, with a particular interest in South, West, and Oceanic African music’s utility in our lives as vehicles for both selves and communal-care.  Founder of Mshenga a Babu (Message from the Ancestors) rhythm ensemble which produced the only national, musical centennial celebration of African America’s Anthem: “Lift Ev’ry Voice and Sing,” in Y2K, Khalfani’s band continues to move crowds to rhythmic responses all ‘round Puget sound.