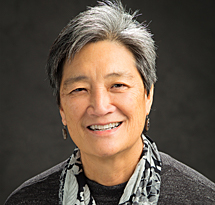 Valli Kalei Kanuha was born and raised in a rural town in Hawaiʻi in the 1950s. She is the daughter of a Native Hawaiian father and Nisei mother. Dr. Kanuha considers herself a critical, indigenous, feminist, activist-practitioner scholar with a focus on gender violence against women and children, and the intersection of race/ethnicity and gender and sexual identity. For the past 45 years, she has worked as a community-based researcher and consultant with organizations in Hawaiʻi and the continental U.S., and lectures widely on violence against women and social justice issues. Her research and community interests include using indigenous, culturally-based interventions for family and domestic violence; intimate violence in women's same-sex and queer relationships; and alternative, community-based justice innovations to address interpersonal and S/state violence, including critiques of carceral systems, transformative and restorative justice, and abolition feminism.