In recognition of her contributions and the impact of the Grand Challenges for Social Work, the American Academy of Social Work and Social Welfare (AASWSW) recently named Dean Eddie Uehara as an inaugural honorary fellow. According to the AASWSW, “The honorary fellow status is reserved for a very small number of major figures in social work who have uniquely supported the founding and development of AASWSW and the Grand Challenges for Social Work initiative.” 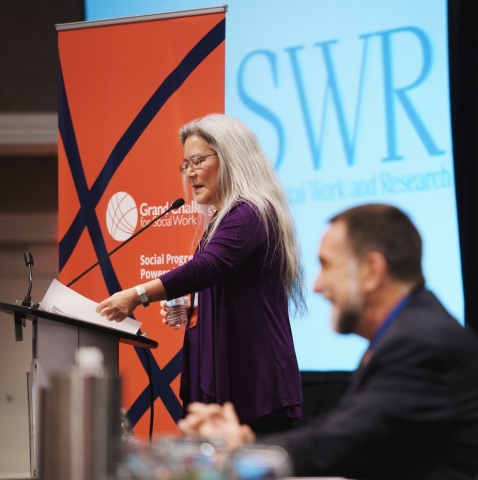 In her congratulatory letter to Dean Uehara, AASWSW President Sarah Gehlert noted: “We are truly delighted to recognize your seminal contributions to AASWSW and its activities. In addition to your remarkable stature in the field of social work scholarship, research and education, you have played a major role in supporting and launching the Grand Challenge concept and in your leadership of the Grand Challenge Executive Committee.”

The induction ceremony for newly elected fellows will be held at the Society for Social Work and Research (SSWR) annual conference in Washington, D.C., on January 12, 2018.

Since first proposing the idea of Grand Challenges for Social Work at a 2012 gathering co-sponsored by the UW School of Social Work and serving on the initiative’s executive committee since its inception, Dean Uehara has been closely associated with this far-reaching effort to explore innovative cross-sector approaches to strengthening the social fabric. She currently serves as one of three co-chairs of the Grand Challenges executive committee; other founding members of the committee include UW social work professors Karina Walters and J. David Hawkins. Dean Uehara was president of SSWR when the Grand Challenges were formally launched at the 2016 SWWR annual conference (pictured above).

In a short time, the Grand Challenges initiative has drawn the participation of hundreds of schools and thousands of faculty and has led to scores of conferences, books, and articles.

As part of the Grand Challenge for youth development, the School is leading the Communities in Action initiative in Southeast and Central Seattle, which is serving as a model for how to take a Grand Challenge from concept to implementation. In 2014, faculty and students from the School began working with a broad coalition of community-based agencies, governmental partners, and funding agencies to apply the evidence-based Communities That Care prevention model in communities. Since that time, Communities in Action has reduced the incidence and prevalence of behavioral health problems among children, adolescents, and young adults in Southeast and Central Seattle by 20 percent.

UW School of Social Work researchers have also authored papers on topics related to all 12 of the Grand Challenges.