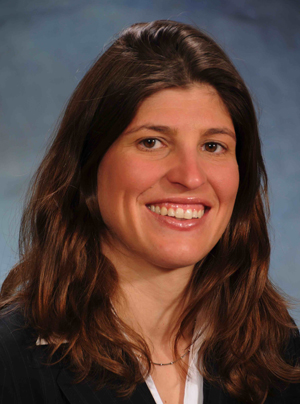 Angenie McCleary (MSW ’07) has received the School’s Early Career Achievement Award. A social worker and elected public servant, McCleary has made significant contributions to the health, safety and quality of life for residents of Blaine County, Idaho.

After receiving her master’s degree from the School of Social Work, McCleary served as a social worker in a Ketchum, Idaho, middle school. Well-known for her extensive civic and community service, she was appointed by the governor in 2008 to fill a vacant Blaine County, Idaho, commissioner seat, distinguishing herself by becoming the youngest person to serve in this position. She is now in her third term as one of three county commissioners, following two successful political campaigns. Her current term expires in 2016.

McCleary’s social work degree and background in health and human services, combined with her passion for working with youth, brings a special focus and commitment to her role as county commissioner. She is particularly interested in issues related to affordable housing, better integration of the county’s growing Latino population, mental health and substance abuse, public transportation and public safety.

McCleary helped implement a new behavioral health system; currently chairs a committee focused on regional transportation concerns, including bike and pedestrian issues; and called together a task force to study the impact of budget cuts on community mental health. In collaboration with the local hospital and concerned stakeholders, the Community Mental Health Task Force created a new mental health clinic at the hospital and developed other measures to address this significant community need.

The Early Career Achievement Award recognizes alumni who, within 12 years of receiving their last degree from the School of Social Work, are carrying out innovative work, demonstrating influence in their field, and making a notable impact on the social work profession. This award, now in its second year, was given previously to Michael Kilmer (MSW ’04), the VA’s principal clinical adviser.

Join Angenie McCleary and help celebrate her selection as the School’s 2015 Early Career Achievement Award recipient at a special reception on Wednesday, June 10, from 5:30 to 7 p.m. in the Governor Room at Hotel Deca. McCleary will be honored along with Lynn Behar (MSW ’06, PhD ’99), Moya M. Duplica Distinguished Alumni Award recipient for 2015.