Washington state’s suicide rate is 11 percent higher than the national average. There are more than 1,100 suicide deaths each year, more than the 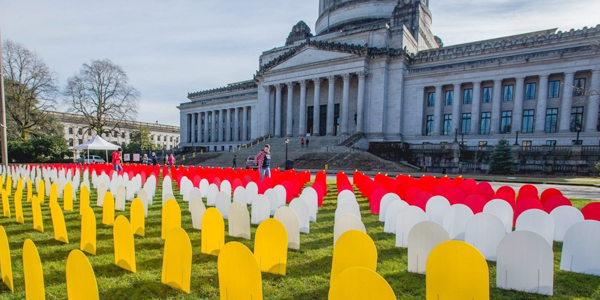 number of deaths from opioid abuse.

The most recent legislation was Senate Bill 6514, which passed with bipartisan support. The new law provides funding to help colleges and universities create partnerships with health care organizations to deliver mental health services on campus, with a focus on providing student veterans the support they need.

In the legislation, Forefront was tasked with building capacity for suicide prevention in the postsecondary community. The team will provide annual suicide prevention training and deepen connections among institutions across the state.

“Our approach has brought the message that suicide prevention is an urgent priority to the front steps of the Capitol, showing the impact of inaction while providing consultation on how we can improve,” says School of Social Work associate professor Jennifer Stuber, Forefront’s co-founder and faculty director. 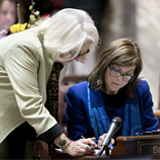 Since Forefront was created in 2012, much of the “heavy lifting” in Olympia has come from Rep. Tina Orwall (MSW ’91). Orwall, who received the School’s 2017 Moya M. Duplica Distinguished Alumni Award, is well-known for her leadership in creating innovative legislation that supports mental-health and suicide prevention, especially targeting Washington’s youth.

Senator Sharon Brown (pictured above, seated) championed the passage of the recent suicide prevention and higher education bill, saying she hoped it would help identify what triggers on-campus suicides and provide the resources needed to prevent additional loss of life in the future.

“State legislators in Washington state should be applauded for their work on suicide prevention,” adds Stuber. “We need to identify and support people who are at-risk in the community and in health care settings. Everyone has a role to play in suicide prevention.”