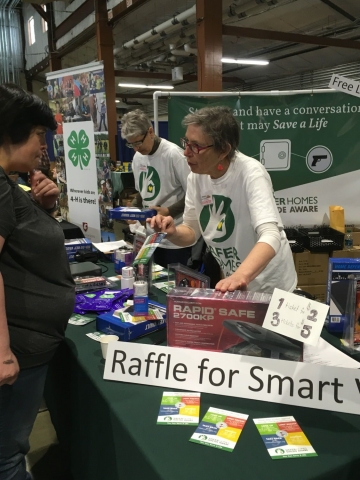 Suicide is among the most pressing public health issues of our time. A recent editorial called the U.S. suicide rate “nothing short of an epidemic,” with one life lost every 11.7 minutes. Rates of suicide are increasing across the nation and it is a leading cause of death among youth, veterans, Native Americans and middle-aged men.

As campaign co-chair Alan Gottlieb from the Second Amendment Foundation points out, “Those of us who own firearms can do something about suicide. We all know someone who has been impacted and the pain associated with this loss.”

The partnership with the Second Amendment Foundation strengthened advocacy efforts with the state legislature, providing the muscle needed to pass House Bill 2793, which supports the campaign goals.

The core strategy of the Safer Homes, Suicide Aware campaign involves trained volunteers who engage participants at gun shows and outdoor sporting events by offering free locking devices for firearms and medications—and a piece of chocolate. During the conversation, the volunteer assesses current storage practices and conducts a brief interview or, in some cases, an intervention. Individuals who are interested in taking home the locking devices are also asked to fill out a questionnaire.

“We have learned from the questionnaires that gun shows are a good venue for reaching veterans who are at higher risk for suicide,” says Associate Professor Jennifer Stuber, Forefront co-founder and faculty director. About one-third of the questionnaire respondents are veterans. Nearly 80 percent of the respondents are men ages 34 to 74—a demographic that accounts for roughly half of all suicides in Washington state.

As they engage participants, volunteers offer a relevant fact or two about suicide to spur further conversation, such as “Did you know that 78 percent of firearm deaths in Washington are suicides?” or “Did you know that suicide is the second leading cause of death among teenagers?”

Forefront staff and volunteers participated in gun shows last year in Spokane, Puyallup and Monroe. The goal is to expand the program’s reach next year and to do a rigorous evaluation of the approach. “We are learning a lot from participants at gun shows about how to prevent suicide in a population that does not typically show up in mental health treatment setting,” says Stuber.