The School of Social Work, Black Farmers Collective’s Yes Farm and the Pacific Northwest Canadian Studies Consortium were collaborating to provide a field-education opportunity to social work student Olivia Jacobs (MSW ‘22). The goal was to do hands-on work at Yes Farm and to connect to BIPOC urban farming initiatives in British Columbia and Washington state. 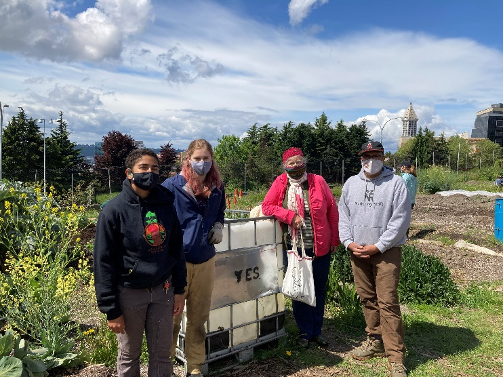 But when the pandemic hit in March 2020, the U.S.-Canadian border closed. A quick pivot was in order.

For Jacobs, that meant refocusing on Indigenous food security for the Coast and Interior Salish peoples and exploring the issues that Black farmers on both sides of the border have faced, historically and currently.

Yes Farm, situated along the I-5 corridor where Yesler Street crosses I-5, “landscapes” the right-of-way with farming produce. Its small staff and many volunteers grow and share produce with local community members and food banks, mirroring a tradition of mutual support common among BIPOC communities. Hannah Wilson manages Yes Farm; Ray Williams leads the nonprofit Black Farmers Collective of Seattle.

Jacobs worked at the farm each week, interviewing volunteers, constructing compost bins, clearing blackberry patches, digging beds, planting seeds and learning more about urban food security problems and solutions. One of her community-organizing tasks was to connect urban Indigenous garden groups, such as the Bernie Whitebear Daybreak Star Garden of traditional Coast Salish plants, with the Black Farmers Collective. Through events and visits between both groups, the seeds have been planted to further share knowledge and practices.

Jacobs and School of Social Work field instructor Morna McEachern collaborated on a report describing the marginalization of urban Black and Indigenous peoples’ relationship to land and food security. In the report, they addressed how policy issues of gentrification, red-lining, the exclusion of Black and Indigenous people in farm support policies and the effects of the Columbia River Treaty (which determines dam operations for power and flood control) affected food security.

In spite of the limitations the pandemic created for a more robust experiential learning experience on the Canadian side of the border, Jacobs was able to develop a range of skills—from digging in the dirt and participating as an ally in a BIPOC-led organization to enhancing her understanding of food security issues around traditional Indigenous cultures.