An estimated 1,750 children in the U.S. die from abuse or neglect each year, and that number is on the rise.

Not only is there an immense physical and mental health toll, there is an economic burden as well. Research estimates the cost at more than $9 billion a year for health care, child welfare, special education and losses in survivor productivity, to name a few.

For more than three decades, Jon R. Conte, professor emeritus, School of Social Work, has been studying the mental health issues related to child abuse and 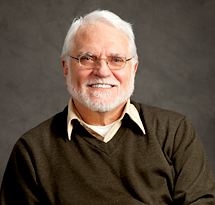 trauma. Conte has written extensively on the topic, spoken at numerous conferences around the world, and served on a number of boards and advisory committees.

Recently, his involvement took a slightly different path. Several years ago, a donor contacted Edwina Uehara, the School’s dean, to say she wanted to provide financial support to students to help them become leaders in sexual abuse prevention. The woman herself had experienced sexual abuse as a child and wanted to be sure that no other child had to live through that same trauma.

When the donor passed away in spring 2018, she left a significant part of her estate to support the center. Conte, who retired from the School in June 2017, is its director. He was pleased he could help enable the last wishes of the donor. “I felt a responsibility for making her dream come true. Her gift will continue to impact the careers of social workers and the lives of abused children each year," he said.

In addition to his work with the Joshua Children’s Foundation Center, Conte is currently undertaking a national survey of best practices to prevent sexual abuse of children in out-of-home situations, in collaboration with the National Coalition to Prevent Child Sexual Abuse and Exploitation. He also served as a consultant on an animated series on sexual abuse issues for children in different age groups for the Barbara Sinatra Children’s Center in Rancho Mirage, Calif. The video series has been viewed by millions around the world.

For more information or to make a donation to the Joshua Children’s Foundation Center, contact Jon Conte at contej@uw.edu.