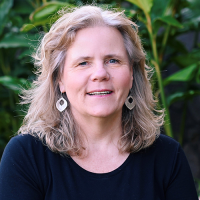 The housing and innovative continuum of services focused on the LGBTQ community are due in large part to the research of Karen Fredriksen Goldsen, UW School of Social Work professor and director of the Healthy Generations Hartford Center of Excellence.

Fredriksen Goldsen was the lead investigator on a groundbreaking study called Aging with Pride, the first national longitudinal research to follow the lives of LGBTQ people between the ages of 50 and 102. Among its findings is that social isolation among aging LGBTQ adults – particularly the 55% who live alone – is a critical public health issue. Although this population is resilient with many strengths, it is more likely to experience poverty, is at higher risk for illness, and faces a host of barriers to accessible health care, including social stigma, harassment and biased treatment.

Fredriksen Goldsen started GenPRIDE in 2015 as a nonprofit organization to help reduce isolation and enhance quality of life among LGBTQ older adults, securing funding from the City of Seattle. The center organized enrichment and exercise classes, made organizational referrals, and trained service providers on ways to work effectively with LBGTQ older adults.

But it became clear the need was greater. As the LGBTQ population aged and began to transition to assisted living communities, some individuals feared they would not be accepted. “The new affordable housing at Pride Place will provide a vibrant hub for the LGBTQ community,” said Fredriksen Goldsen, “and ensure all seniors living in the Capitol Hill area have a place they can call home.”

The building, which will cost more than $50 million, will open in mid-2023. In the meantime, the GenPRIDE senior center is in temporary quarters at 12th and Pine. The center is actively fundraising toward a $5-million goal to pay for the new expanded service space. To date, $3.3 million of that amount has been raised.