In this position, Orwall has exemplified exceptional dedication and leadership in driving innovative state legislation that supports significant social change. Prior to establishing her impressive legislative record, Orwall was a clinical social worker serving people with mental illness and advocating for the homeless. During that time, Orwall learned that human-service systems improve when people come together around a common vision. “Social work gave me the ability to look at complex systems, understand them and work to include 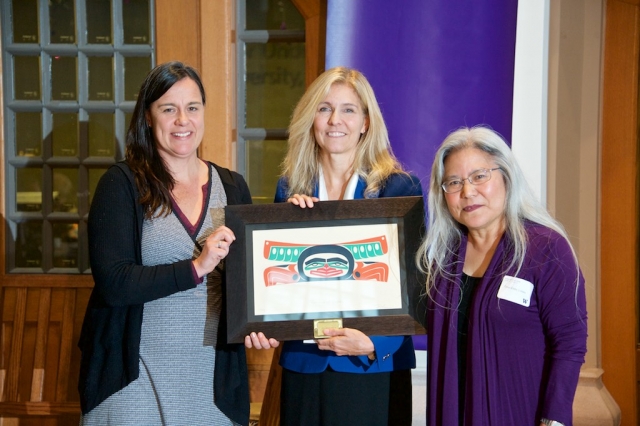 everyone’s voice,” observed the legislator in an earlier interview with the School.

In presenting the award, Dean Eddie Uehara (pictured, right) said: "Tina has demonstrated an unwavering commitment to the most vulnerable populations in our state—and a spirit of inclusion that has helped her address tough social issues in a time of sharp partisan divisions." Orwall’s collaborative approach has powered a number of successful legislative efforts that include expanding access to community colleges for state youth, lowering home foreclosures during the Great Recession, and reducing the high rate of death by suicide in our state.

In one alumni award nomination letter, former distinguished alumni award recipient Sue Eastgard (MSW ’88), wrote: “Washington state is now seen as a leader in suicide prevention and none of this would have happened without the partnership, leadership, passion and compassion of Tina Orwall.”

Associate Social Work Professor Jennifer Stuber (pictured, left) wrote in her commendation letter: “Rep. Orwall never shies away from social justice issues whether it’s suicide prevention, low income housing, sex trafficking or rape kit reform. She’s managed the impossible on all of these fronts. She has a special gift to find common ground on issues and to work across the political aisle.”

Rep. Orwall and Dr. Stuber—the faculty director for the School’s suicide prevention group Forefront—have worked together for a number of years to connect diverse groups across the state, resulting in a series of innovative laws supporting improved mental health and suicide prevention education for health care professionals, K–12 staff and counselors, pharmacists, gun dealers and other groups.

Representative Orwall was presented with the 2017 Moya M. Duplica Distinguished Alumni Award on Oct. 29 at the School’s alumni homecoming and social work celebration on the UW Seattle campus.