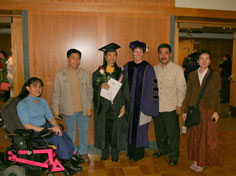 Congratulations to Dalin Meng who becomes the first RUPP Partnership scholarship graduate earning her MSW and a certificate in Psychological Trauma: Effective Treatment and Practice.

Dr. Barom Neth made the welcome address for the workshop. Also participating were Mr. Seng Phon, Dean of the Faculty of Social Sciences and Humanities and Ms. Dalin Meng, who will be graduating this June 2008 with a MSW and returning as the first Social Work faculty at RUPP. The meeting was well attended with approximately fifty representatives of NGOs, Ministry of Women's Affairs, and other RUPP departmental faculty. There was enthusiastic support of the new Social Work Department. All necessary documents have been submitted to the Ministry of Education and approval is pending in order to enroll the first cohort of students next Fall 2008.

Approximately 100 persons helped kick off the 2nd year of the UW / RUPP Social Work Partnership by attending the 2007 Open House. The RUPP future faculty members shared information about their areas of expertise and about the situation in Cambodia. 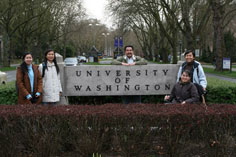 The five RUPP Partnership scholarship recipients brace for a cold fall and winter in Seattle as they study for their MSW.