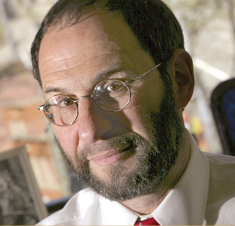 Amnon Shoenfeld (MSW ’79) is the 2014 School of Social Work Distinguished Alumni Award recipient. A passionate and tireless champion for individuals with mental illness or substance abuse issues, Shoenfeld recently retired as director of the King County Mental Health, Chemical Abuse and Dependency Services Division, where he worked for more than 30 years.

Under his leadership, King County implemented a range of programs and services to connect those in the criminal justice system with unmet mental health or substance abuse needs to treatment, housing and other support services. Those receiving services were often able to reduce their jail time, lower re-offense rate, and experience a more successful re-entry into the community.

After receiving his bachelor of arts in psychology from the University of Chicago, Shoenfeld moved to Seattle and began his career in public mental health as a clinical case manager at Seattle Mental Health.  After five years with the agency, he left to attend the UW School of Social Work. His first position after receiving an MSW was working as mental health professional with the King County Mental Health Division. Later, he would credit his success as a mental health administrator to his early years in the field, where he learned first-hand what services could best benefit this population and their families.

In 1997, he moved into an administrative position directing Crisis and Commitment Services at the county’s Mental Health, Chemical Abuse and Dependency Division. In 2002, he was appointed division director. He led the development of the Mental Illness and Drug Dependency Plan, which was approved by the Metropolitan King County Council in 2007, and is funded by a county sales tax that dedicates more than $48 million per year for programs that help individuals suffering from mental illness and substance abuse. He contributed to numerous legislative initiatives to improve mental health and substance abuse services and was a leader in advocating for the development of permanent supportive housing for chronically homeless individuals disabled by mental illness and chemical dependency.

Over the years, Shoenfeld received many awards, including the Director’s Award from the King County Department of Community and Human Services in 1997, Valley Cities Community Achievement Award for Innovation in 2006, and the Governor Booth Gardner Mental Health Champion Award from Sound Mental Health in 2010.

Please celebrate with us at our June 12 reception. Join Amnon Shoenfeld to celebrate his selection as the School’s 2014 distinguished alumnus at a special reception preceding our graduation ceremony at the Alaska Airlines Arena in the Hec Edmundson Pavilion on the UW campus. The reception is on June 12 from 4:30 to 5:30 p.m. in the pavilion’s Founders Club.  Guests attending the reception are welcome to attend the graduation ceremony.