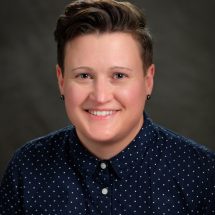 West Duncan has a 20 year history in serving LGBTQ+, youth and adult communities through non-profit engagement and education roles throughout the world. Beginning with obtaining their BA in Women’s and Gender Studies from the Evergreen State College, West went on to work as a Communications Director for LGBTQ+ organizations in Portland OR, focusing on marriage equality, Diversity, Equity and Inclusion and youth advocacy. From there, West moved abroad to South Korea where they taught 3rd and 4th grade in a public school, residing in a rural town in the central countryside.

After moving back stateside, West received their first Master’s Degree from DePaul University in Chicago, IL where they were also a Teaching Assistant for the Department. After graduation, West began focusing their work on advocating for LGBTQ+, gender non-binary and women’s healthcare where they became the Development Director for the Chicago Women’s Health Center; one of the first healthcare centers in the country to specialize in gender affirming care and reproductive justice. West’s work also contributed to ensuring comprehensive sex education in Chicago-based schools for youth 5th-12th grades. From there, West became the Education Coordinator at the Society of Gynecologic Oncology in Chicago, focusing their work on provider education strategies for ensuring representation for LGBTQ+ and BIPOC patients requiring competent care.

Most recently, West earned their additional Master’s in Social Work from University of Denver and has been working in community mental health as a clinical social worker serving youth ages 5-17 years-old. West is working towards obtaining their Washington state license for clinical social work to be the most well-rounded social worker they can be. West began as a Curriculum and Facilitation Specialist with the Alliance in June 2021 and is excited to serve Washington State’s diverse communities advocating for youth and families.

In their free time West is an avid outdoors enthusiast, often spending more time in their tent than at home. West also has a long history of working on and racing sailboats, a lifelong passion and integral part of their family history. When not in the woods or on boats, West can be found traveling often, engaged in social justice activism and chasing after their rambunctious cat named Moo.