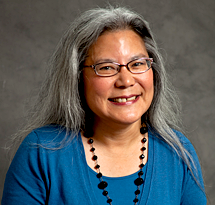 National leader in innovative social work science, service and practice, Edwina (Eddie) Satsuki Uehara joined the University of Washington faculty in 1990 and was named Dean of the School of Social Work in 2006.

Dr. Uehara is the School of Social Work’s first dean of color, and the UW’s first Asian-American female dean. Under her leadership, the School’s advanced social work program has been consistently ranked one of the nation’s best by U.S. News and World Report and number one in the world for its scholarship and impact by the Center for World University Rankings. In 2010, Dr. Uehara was named the Ballmer Endowed Dean in Social Work, the first such endowment at a public university in the United States.

Dr. Uehara’s research interests lie in the social and cultural constructs around health care, mental health and the ways that Asian Americans and African Americans access services. Her research has been supported by grants from the National Institute of Mental Health and the National Research Center on Asian American Mental Health, among others. She has served as president of the Society for Social Work & Research and of the St. Louis Group for Excellence in Social Work Research and Education.

Dr. Uehara serves on the leadership team of the American Academy of Social Work and Social Welfare’s Grand Challenges for Social Work, an initiative she co-conceptualized to advance science-based efforts that strengthen the social fabric. The initiative, launched in 2016, has energized the profession, delivered important innovations that address urgent social problems and inspired scores of conferences, books and articles. The Academy named Dr. Uehara an Honorary Fellow in 2017 for her Grand Challenges leadership and a Fellow in 2018 for her significant contribution to the profession.

Moving to Chicago, Ill., she worked in community development, mental health program development and community-based advocacy research before serving as assistant director and executive director of the Taylor Institute. From 1994–2007 she served on the faculty at the National Research Center on Asian American Mental Health at the University of California, Los Angeles/Davis.